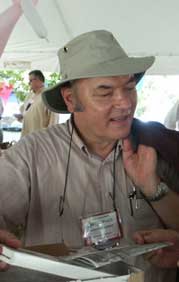 We are sad to announce that Christopher Clarkson died peacefully on 31st March, 2017.

He was a world authority on manuscript conservation and a vocal supporter of education in the arts and crafts. He is survived by his wife Oonagh, children Eoghan and Siobhan, grandchild Seren, and his sister Josie.

Christopher Clarkson was a noted conservator of parchment and paper manuscripts, early printed books and book-bindings. He was an accredited member of the Institute of Conservation.

Mr. Clarkson was an authority on bookbinding structural history, specialising in the period from the birth of the codex to the early Renaissance. He gave lectures and workshops in many countries. In 2004 he was awarded the Plowden Gold Medal of the Royal Warrant Holders Association in recognition of his significant contribution to the advancement of the conservation profession.

On leaving the Royal College of Art Christopher Clarkson taught writing and illuminating, wood engraving, etching and ‘fine’ bookbinding to Diploma level in leading Art Colleges. He also worked for Douglas Cockerell & Son and later for Roger Powell. In November 1966 he went with the English Government team to the City of Florence, where the flood had devastated many libraries and archives.

Since 1972 he held senior posts in the conservation of rare books and special collections at the Library of Congress, Washington DC, the Walters Art Gallery, Baltimore and the Bodleian Library, Oxford. He then started and ran a book conservation internship programme at West Dean College, West Sussex.

Since 1998 he worked as a private conservator mainly concentrating on the conservation of parchment and paper manuscripts and documents. He was conservation consultant to the Bodleian Library, Oxford, Hereford Cathedral Mappa Mundi & Chained Library and The Wordsworth Trust, Dove Cottage.