When Chris’s West Dean workshop closed in 1998 he returned to Oxford, and set up in private practice. He is presently conservation consultant to the Bodleian Library, The Wordsworth Trust and Hereford Cathedral Mappa Mundi and Chained Library. As a freelance conservator he has worked on the conservation of many important manuscripts and early printed books for well-known Institutions in Europe and America.

For eight years he ran a two-week Staff Training programme for The National Archives and National Library of Slovenia. He also runs regular staff training programmes for the Bodleian Library and Dove Cottage, Grasmere. He has given lectures, workshops and run condition & treatment surveys in many countries (Fig 31).

Chris is an authority on the history of bookbinding structure, specializing in the period from the birth of the codex to the early Renaissance (Figs 32 & 33). In this capacity and for many years he has worked with the staff of the Pierpont Morgan Library, New York on the early Coptic Binding collections. He has taught regularly on the specialist ‘History of the Book’ courses, organised by Terry Belanger at Virginia University, USA. 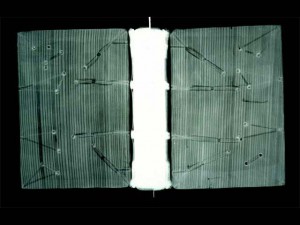 Chris has acted as a government representative advising Danish and Icelandic libraries on early manuscripts and reported on the condition of the Book of Kells for Trinity College Dublin. His latest report was for the National Museum of Ireland concerning the stabilization of an eighth century psalter discovered in a peat bog in July 2006. The report contained historical comparisons and suggestions as to possible treatments. John Gillis has been seconded from Trinity College Dublin to treat this extremely difficult artefact. The manuscript has now been named the Fadden More Psalter and dated ca 750, slightly earlier than the book of Kells. 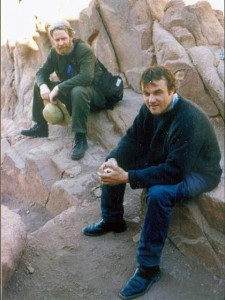 For the ‘Prince Charles Fund’ supporting the Monastery of St. Catherine’s, Sinai & through Nicholas Pickwoad (Fig 34) who is in charge of the project, Chris has reported on the early 5th century Ms. Syriac 30 and is considering the stabilization treatment of other early manuscripts. He has just concluded a report on the newly discovered fragments of the Codex Sinaiticus at the Monastery.

Chris has published books and many articles on various aspects of the materials and techniques of book conservation, also on medieval book production and binding techniques.

In 2004 he was awarded the Plowden Gold Medal of the Royal Warrant Holders Association in recognition of his significant contribution to the advancement of the conservation profession. An extract of the citation reads, “… Chris’s contribution to training and educating young conservators around the world has lead to the invaluable dissemination of his approach to conservation and paradigm of minimal intervention. As an archaeologist of the book, his teachings have fostered a deep historical awareness of the object, requiring profound knowledge of a wide variety of materials and a broad repertoire of techniques…”.