He was sent to Florence to join the English rescue team in November 1966 after the devastating flood had inundated the many libraries and archives of the City (Fig 8). Millions of books had suffered damage from water, mud, sewerage and oil. There he joined Roger Powell, Peter Waters, Anthony Cains and Dorothy Cumpstey. The team was directed to begin salvage efforts of the collections at the Biblioteca Nazionale Centrale di Firenze (BNCF), devising a treatment protocol as well as supervising and teaching volunteers and students basic treatment procedures. The Director, Dr. Casamassima, arranged the use of Forte di Belvedere for sorting and selecting books, and the Florence Railway Power Station to wash and dry books. There Anthony Cains had set-up makeshift workstations with washbasins and drying lines so as to treat items returning from being force dried in granaries &/or tobacco kilns. On arrival Chris was put in charge of the many volunteers at the Power Station (Fig 9).

By Easter 1967 temporary workshops had been established on the main entrance floor of the BNCF (Figs 10 & 11):

After the books had returned from forced drying, the team would continue detailing their damage and specify treatment (Fig 12), then rewrap with insecticidal paper. It was during this period that Chris started to note the strengths and weaknesses of the various types of binding structures and began questioning why many limp vellum binding structures had survived intact (Fig 13), when other binding types had suffered greatly. Chris began to develop methods of limp vellum binding based on late medieval principles (Figs 14, 15 & 16). As time passed and work permitted, Chris also began to train selected volunteers and binding staff in the application of approaches to book restoration based on those being established in painting conservation. 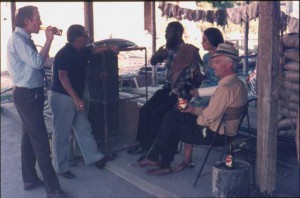