In 1979 Chris moved back to England to accept a post as the first Conservation Technical Officer at The Bodleian Library (Fig 25). Oxford. With Dr M. L. Turner as Head of Conservation and Judy Segal (Fig 26). as the only paper conservator, they set up a Preservation and Conservation Section which combined the General Bindery and later the Stack staff and Photography sections. The section also became responsible for organising, designing and running the Book and Manuscript Programmes for Oxford University Libraries. Later they were able to organise a more secure and safer exhibition policy. Chris was able to set-up a small area where he could carry out conservation, repair and rebinding projects, as well as one-to-one teaching, during this time numerous library and archival material had Chris’s attention.

Among his innovations while at the Bodleian Library were adjustable book cradles for more controlled and gentle conservation treatments (Fig 27) and also for photography. In the last fifteen years more sophisticated adjustable cradles have been developed for use in the world of digital photography. Chris also devised the stepped wedge foam block system for general reading room use <http://www.polyformes.co.uk/clarkson_book_supports_.html>. 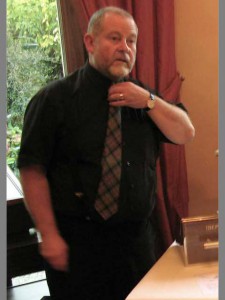 Chris has sat on various British Standards Institution (BSI) Committees, looking into archival materials, shelf storage, environmental standards etc. Fortunately for him, at the time he arrived at the Bodleian Library Stuart Welch (Fig 28) had just started Atlantis Paper Co Ltd., at the Docklands Art Warehouse, Gulliver’s Wharf where he dealt in artists’ sundries. Stuart became interested in developing a fully archival board and in supplying other specialist papers. After Atlantis changed hands Stuart started Conservation By Design 1992, which expanded his involvement with Chris into stocking or developing other items such as quality glue brushes, threads, braids and cordage.