Chris’s appointment was to develop, within the Preservation Department, a section devoted to the conservation and treatment of the rare book and special collection material within the Library. Under Frazer and Peter, Don and Chris were involved in designing the first library and archive preservation and treatment programmes. Among the first of these programmes in which Chris was particularly involved and used in the training of his young staff were:-

During his appointment at the Library of Congress Chris also carried out various conservation, repair and rebinding projects and furthered his research on binding structures and past repair techniques. To finish his report on Limp Vellum Binding he received part funding from Vernon Clapp of The Council of Library Resources.

Unfortunately this report (Fig 23) and the film mentioned previously were never published, however Chris gave a paper at ICON’s 4th Triennial Meeting, Venice 1975 entitled ‘Limp Vellum Binding’ which was published in 1985 by Michael Gullick, a former student of his. A revised edition was published in 2005 (and is available for online purchase, click for info & sales).

Through the auspices of John Krill, then of the National Gallery of Art, Chris was approached to work on their Rosenwald cut-out miniature collection. It was this project where he innovated a thread mounting technique for the housing and display of single leaf parchment. The technique utilizes the principle that twisted thread shortens and lengthens in environmental fluctuation opposite to the expansion or contraction movements of parchment (Fig 24). This work culminated in a small jewel-like exhibition at the Gallery. He also carried out conservation work on the Freer Gallery’s collection of Islamic manuscript fragments. 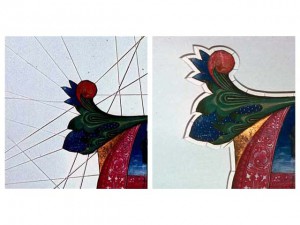